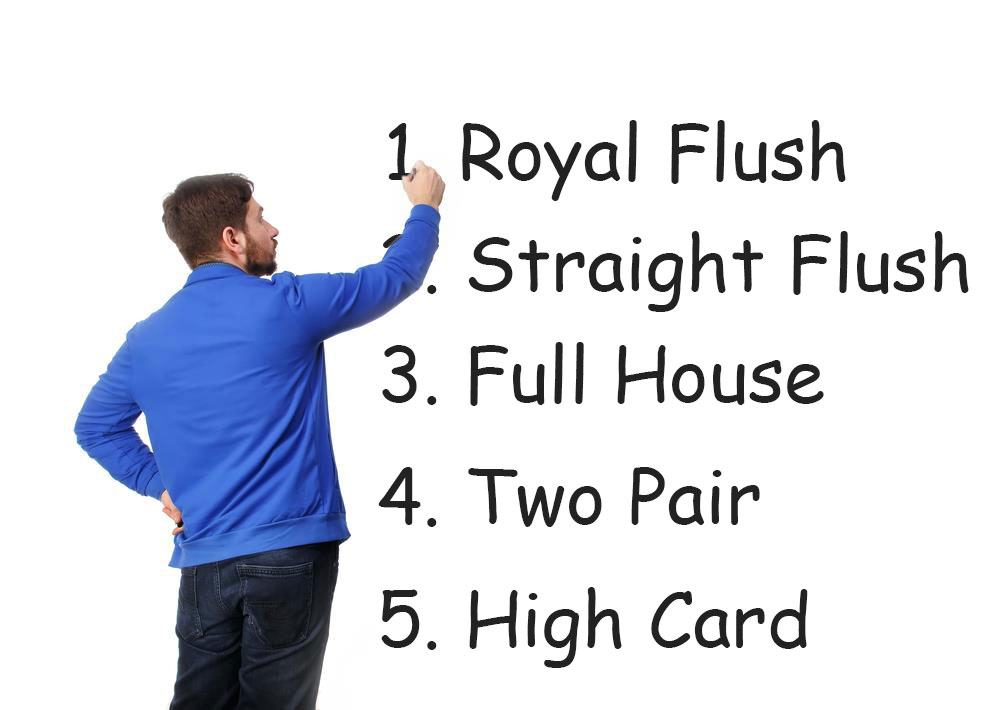 A No-Nonsense Guide to Poker Hands

We won’t bore you with a long intro today. After all, this is a no-nonsense guide, so why don’t we get right to it:

At the top of the pile is a set of five suited consecutive cards with an ace as its highest card. No other hand can beat it, and if two or more active players have it, the pot is split evenly among them. Example: As Ks Qs Js 10s

It’s practically the same as a royal flush but it uses a king or lower as its highest card.

If two or more active players have it, the player with the highest high card wins. The pot gets split evenly between players with the same highest cards. Example: Qc Jc 10c 9c 8c

This poker hand is made up of four cards of the same value and a random fifth card to complete the set.

In case there’s a tie, the fifth kicker card is used to determine a winner. If the fifth card on the table is higher than the highest kicker card any active player is holding, however, the pot is split evenly among all tied players. Example: 2d 2h 2s 2c Kh

This hand is made up of any five suited cards.

To break ties, the highest high card of each player gets compared. If they’re the same, then the second highest card is checked. The process continues until either one player comes out on top or the pot gets split evenly among players holding flushes of the exact same value. Example: Qd 10d 7d 4d 2d

Ties, in this case, are broken just like you would with flushes. Example: Jd 10c 9s 8h 7d

This hand is simply a trip plus two random cards.

In the event of a tie, the trip with the highest value wins. A fourth or fifth kicker card is used to determine a winner in case the trips are of the same value. Example: 5d 5h 5c Kd 9s

As the name implies, this hand is just a pair of pairs plus a random fifth card to complete the set.

The high pair is compared in case of a tie. If they’re of the same value, then the low pair is checked. If they’re still tied, then the fifth kicker card is used to determine a winner. Example: Kd Kh 7d 7s 3c

As you may have guessed, this hand only has one pair instead of two so it comes with three other random cards to complete the set.

Ties are broken by first comparing the pair and then moving on to the next three kicker cards in case the pairs are of the same value. Example: 9s 9c 6d 4s 2h

Ties are broken in pretty much the same way as with flushes and straights. Example: 9h 6c 5s 3d 2d

Knowing This Poker Hand List is Only the Beginning

These poker hand rankings are fixed for most standard five-card poker games like Texas Holdem. Interestingly, though, having a strong poker hand (except for a royal flush) doesn’t necessarily guarantee that you’ll win. Professional players employ a host of strategies throughout the different stages of the game to outsmart and even force their opponents to fold prematurely. They also have the ability to gauge whether or not their starting hands could later on translate to winning poker hands based on how their opponents are acting and what cards are being revealed on the table.

Of course, all of these things come with experience. Professional players have achieved pro status by playing hundreds of games and doing hours of research, always trying to learn new things, improve their skills and just develop an overall better understanding of the game.

The good news is that we can help you do just that because when you sign up for a www.safeclub.com account, you’ll not only get to enjoy real money poker action online, you’ll also get access to more a whole lot more of these poker guides, tips and tricks!