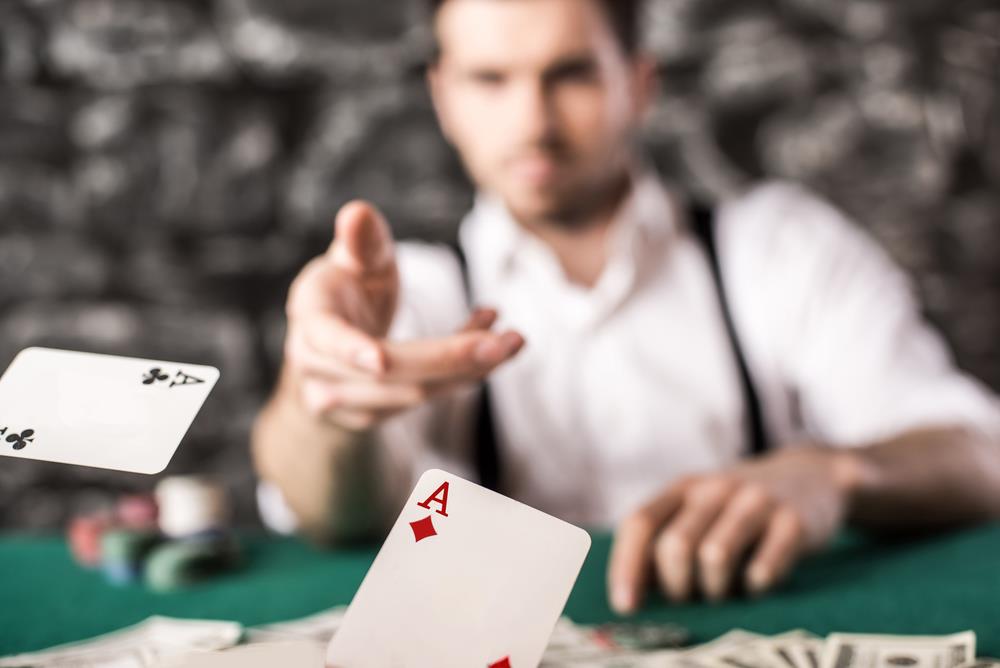 As with pretty much any gambling-type game, the goal in Texas Holdem poker is to win your bet back along with the pot, which, in this case, comes from the money all the other players at the table put in. You can do so by either having the best hand of the round or convincing your opponents that you do even if you don’t, forcing them to back out.

There’s a full guide on breaking ties here if you ever find the need for one.

A round of Holdem usually starts with two players each posting a small bet called a blind (more on this later) before any cards are dealt. This is done to ensure that there’s money in the pot even if everyone decides to back out (also known as folding) after seeing their respective starting two-card hands (called hole cards). The responsibility of placing the blinds rotates and gets passed on to a new pair of players with each round.

The dealer then proceeds to give each player their hole cards. Based on how strong or weak these cards are, each player can decide whether to place a bet or fold. This stage of the game is called the deal.

Afterward, three cards called community cards are dealt face up on the table. This stage is called the flop. Each player can again bet or fold depending on how strong the hand they are able to build when they mentally combine their hole cards with the community cards.

A fourth community card is then revealed. This stage is called the turn or the fourth street. Again, any remaining players either bet or fold.

Finally, a fifth community card is revealed in the stage of the game called the river. This is the last round of betting.

After the final round of bets is placed, the game culminates in the showdown where all remaining players reveal their hole cards so everyone can see who has the strongest hand. The winner gets to take all the money in the pot (minus any cuts the casino takes, which is also known as a rake).

Professional games typically have an assigned non-playing dealer who is usually part of the venue’s staff. In casual games, on the other hand, the players take turns dealing.

In both cases, a marker called a button is placed in front of the player acting (or is supposed to be acting) as the dealer.

In every round, each player who decides to place a bet must at least call (i.e., match) the current bet amount. Of course, if you’re confident in your hand (or just want to psyche your opponents out), then you can always can raise and bet a larger amount.

Keep in mind, however, that bet amounts are cumulative. So, if, for example, you’ve already placed a $10 bet and an opponent raised the bet amount to $30, you only need to put in an additional $20 to call it.

You also can check (i.e., pass) and not place a bet as long as no one else has put in any money in the pot yet. Otherwise, your only option is to fold.

Finally, Texas Holdem games can be played two ways: limit or no-limit. The former prescribes a pre-determined betting amount, while the latter allows each player to bet as much money as they want. For example, for $10/$20 games, you need to bet $10 post-deal and flop, and then bet $20 post-turn and river.

Now, as for blinds, remember how two players are required to place them each round? Well, one of them posts a small blind, and the other posts a big blind. The big blind is always equal to the first bet amount in limit games (e.g., $10 in a $10/$20 game). The small blind, on the other hand, is always half of the amount of the big blind.

That’s pretty much everything you need to know to get started playing real money poker. Good luck and have fun!