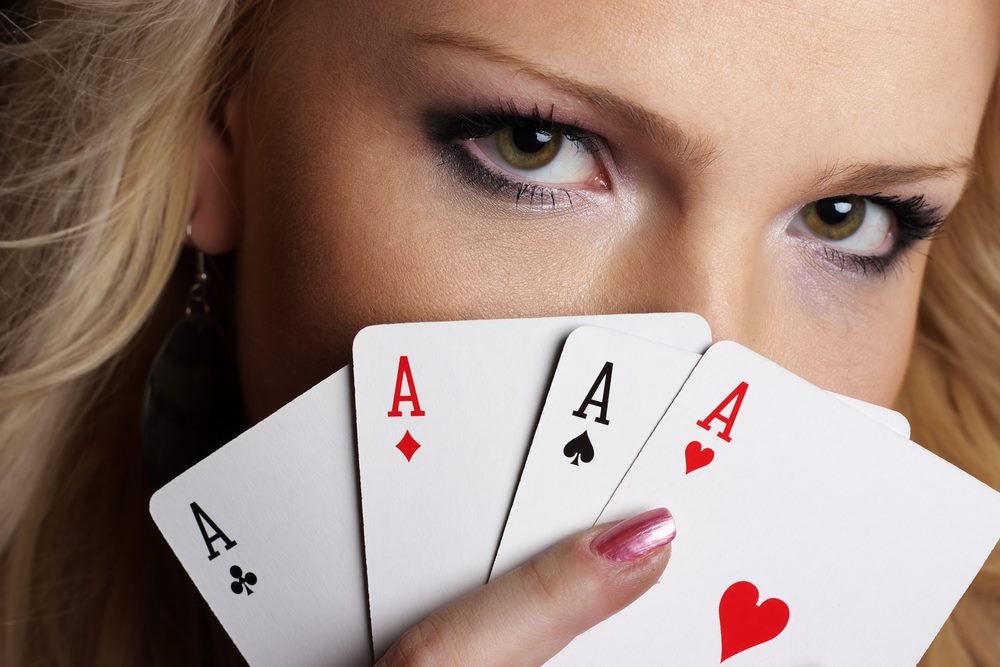 There is an easy way to remember how high a hand ranks. Here, rare hands are worth more than common hands. To help you out, read the Poker hands rankings below.

Here is a list of 10 possible hands found in most poker games. They are shown strongest to weakest:

In terms of strength and rarity, no other hand could beat a royal flush. It’s made up of five consecutive cards of the same suit starting with an ace.
Probability: 0.000154%

As you may have probably guessed based on the name, this hand is made up of four cards of the same value. But since standard poker games use five-card hands, it includes a random fifth card to complete the set, which can then be used as a kicker card in case of a tie.
Probability: 0.0240%

When showdown time comes, the trips get compared first, and then, if they’re tied, we move on to the pairs.
Probability: 0.1441%

Simply put, a flush is just a set of suited cards.

Interestingly, while a standard deck of 52 cards contains a total of 5,108 different flush combinations, the hand can still be considered pretty rare considering the odds of any player getting one are no more than 508:1.
Probability: 0.1965%

This is essentially the straight part of a straight flush. And since we know that “flush” means suited, then “straight” could only mean consecutive – and that is exactly what this hand is: five non-suited consecutive cards.

Of course, the straight with the highest high card wins whenever two or more active players end up with the hand.
Probability: 0.3925%

This hand is pretty much the same as a four of a kind but with only three cards of the same value, as the name suggests, instead of four.

Needless to say, it uses two random cards to complete the set instead of just one.
Probability: 2.1128%

We’ve talked about pairs earlier as part of a full house. Well, this hand just has two of them plus a random fifth card to complete the set.
Probability: 4.7539%

As the name implies, this hand only has one pair, and, consequently, three random cards to complete the set.
Probability: 42.2569%

Finally, we have the hand that you end up with by default whenever you are unable to build any of the other hands we’ve seen so far before showdown time comes.

Now, while it is the weakest hand you could possibly get, you could still win with it with a little bit of strategy. More on this in the next section.
Probability: 50.1177%

What is the order of poker hands?

Most poker games use a standard 10 hand ranking system. This is essential in five-card games like Texas Holdem. In any case, the strength of each player’s hand is determined by how hard it is for players to get it. In other words, if your hand is hard to get, your hand is hard to beat. For example, the highest ranking poker hand is a Royal Flush. The best explanation of ALL poker hands order is found here.

What beats what in Texas Hold’em?

Lets start with the BEST hand, a Royal Flush. It’s made up of five consecutive cards of the same suit starting with an ace. The second best hand, a Straight Flush, is like a Royal Flush, except uses a king or anything lower as its highest card. Next up is Four of a Kind (quads). This hand is simply four cards of equivalent value. Further hands that get beat by these card combos can be found here.

What are the ranks in poker?

Almost in every poker game, suits are of equal value. Generally, the Ace has the highest value, then King, Queen, Jack, 10, 9, 8, 7, 6, 5, 4, 3, with 2 being the lowest. However, the Ace can be alternately assigned a low card value of 1 if the rules require it. You can also find more poker hand rankings including tie breakers here.

How do you play poker?

General poker games involve players trying to make the highest ranking hand with dealt cards. The most popular community card variation is Texas Holdem poker. All players are first dealt two hole cards face down. Then, five community cards are dealt face up in three stages. These are the first three cards (the flop), another card (the turn), and a final card (the river).

Finally, each player makes a 5 card hand from 7 possible cards (his 2 cards and 5 community cards). Rounds of betting also occur between each stage. Winner takes the pot.

Which suit is highest?

In the unusual case when suit ranking is applied, the two most common conventions are:

What is the order of poker hands?

How Do I Learn More About Poker Hands?

Learn these rare and hard to find tips: